Life of Pi: The Mystical Island

I just watched the movie Life of Pi. In one word, "beautiful"! It is a beautiful picturization of a heart-wrenching, but eventually uplifting story. It is a beautiful work of art that is surprisingly accurate in its portrayal of Indian culture, though it was born out of the work of a Western (French-Canadian) author, Yann Martel, and a Far Eastern (Chinese-Taiwanese) filmmaker, Ang Lee. Most of all, it is a beautiful rendition of the profoundly abstract Hindu (which literally means Indian, political correctness apart!) philosophy of monism, which happens to be the dominant Hindu/Indian religion today (more on this another time).

Of all the things I liked about the movie, my favorite was this seemingly perplexing scene that shows Pi on a mystical floating island. Many people seem to think that this scene was weird at best, and pointless at worst. I beg to differ, since my analysis of that scene shows that it is a beautiful allegory about Indian philosophy (in keeping with the theme of the whole story). This analysis was prompted by my discussion with my friend, Vijay, who saw the movie with me, and pointed out that the island was shaped like a human in a shot shown from afar. I thought it could be an allegorical reference to Vishnu, and after my analysis, it turns out to be much deeper than I thought. While my analysis is somewhat speculative (only Martel can state the exact meaning), I support my interpretation with ideas expressed in the story, and relevant Indian philosophical concepts (for the interested reader, I have put in links to Wikipedia articles).

2. Metaphor: The seemingly surreal happenings on the island.
Meaning: Our reality, which is a "dream" in the mind of Vishnu (this was also mentioned at the beginning of the story).

3. Metaphor: The carnivorous algae on which the island floats.
Meaning: Sesha, the five-headed snake on which Vishnu rests.

4. Metaphor: The numerous meerkats.
Meaning: Human beings. I know, what an unflattering metaphor! Possibly, they were chosen for their semi-bipedalism, semi-intelligence, social living, or some combination of similar reasons.

6. Metaphor: The meerkats live meaningless lives eating, running, and dying on the island, under the impression that this is all there is to reality.
Meaning: Maya / Avidya, the illusion about the false nature of reality, which ultimately arises due to ignorance, and causes people to be stuck in Samsara.

7. Metaphor: Pi realizes the true nature of the island, and recognizes its futility.
Meaning: Vidya / Sat / Chit, knowledge or consciousness of the ultimate truth, which dispels Maya, and enables one to achieve enlightenment and liberation.

The whole story is filled with many wonderful metaphors. And it is fascinating to me that the author managed to weave these complex concepts into the story so beautifully. It seems he must have diligently studied Indian philosophy. I should also note that some people have pointed out similarities to Abrahamic (Judaic/Christian/Islamic/Bahai, all monotheistic religions) mythology, particularly the resemblance to the Garden of Eden. More importantly, I think Pi's story is remarkably similar in spirit to the Book of Job - a pious man being subject to unfathomable trials by his God, and yet his faith is unimpeachable, and he eventually achieves salvation (the soteriology of the Abrahamic religions). This is quite possible, again in keeping with the multi-religious, and monistic theme of the story that aims to blend philosophies. It would be great if someone can refer me to a similar analysis as above from the perspective of Abrahamic, or even Chinese (Confucian/Tao) mythology or philosophy. If I ever happen to meet Martel, I hope to remember to ask him how accurate my interpretation of his allegory is (and why exactly he chose meerkats!).
Posted by A. K. K. at 11:20 AM

Dear blogger, I must congratulate you for the depth of reasoning and also your attention to detail while watching this movie..You have directed a reader like myself to a very thoughtful interpretation as I thought that only I saw the island as a floating Man, when Pi decided to stock up the goodies from there and move on from it, in a zoomed out perspective shot of the given island...My quest to this mystery came to a halt today because of your blog...Thank you for enlightening seekers with the treasures you have found, free of cost..God Bless.

The island was shaped as a woman and was Pi's way of mentally coping with have to eat the flesh of his own mother. The meercats represent maggots, and then he finds a human tooth which cannot be eaten.

her mother died and the sharks have eaten her corpse. i still stick to the blogger metaphor :)

My dear Friend You have read my mind! Thats exactly( I literally mean word by word ) what I had in my mind!

also one more explanation could be this-

My dear Friend You have read my mind! Thats exactly( I literally mean word by word ) what I had in my mind!

also one more explanation could be this-

An additional thought to offer on this island metaphor:
Early in the movie, Pi asks the girl he loves about the lotus blossom she shapes with her dance and the discussion evolves into a comment about the lotus blossom in the forest. She looks at Pi rather knowingly as she knows the imagery of lotus blossom better than he does. Pi is still too innocent to understand so she doesn't enlighten him. In feminist theory this lotus is symbolic womb imagery. Later, on the island, shaped like a woman, Pi peels open the lotus blossom...in the middle of a forest. The parallel imagery is striking in that in the "womb" of the island, Pi loses his innocence and realizes that he cannot step out of the stream of life and just remain on the island (or in the comfort of the womb). His "twin" has stayed on the island and had died--leaving behind a tooth. He must leave the island/the mother's womb to be (re)born. He leaves the island and takes with him sustenance from the mother's body to live. This imagery works on multiple levels with Hindu and Christian symbolism as well as with the "coming of age" (birthing of a man from a boy) nature of the story.

I think, in the book the auther had a much more simpler aim in mind. You see upto this point in the book we tend to take the events at face value. They could have happened. But the carnivorous island, human teeth in the fruit that to, a separate tooth hidden in each fruit-now these events start to seem so implausible so much so that we begin to doubt pi as the "reliable narrator". Is he slowly losing his mind? Hallucinations? Cut to the end of the story-we are now aware of two different events-one with the tiger and one without! Now if you do choose to belive the one with the tiger, you will need to accept the events surrounding the island as well. And that requires the leap of faith that the author intended!!!

It can be a possible reason of using the metaphor of lord Vishnu symbolically for the island which also represents a vital part of our life n its importance.Somethings should always be left as it is, for its good cause.It anyhow showed the matured imaginations of PIwho related it to his very existence.

not only the movie is beautiful, your interpretation is too. i am really amazed.

I think people are represent by meerkats because one of the avatars of Vishnu is a boar. There is already a strong pop culture connection between these two animals in the minds of many thanks to The Lion King. So that choice of animal is a further clue that the island is indeed Vishnu. 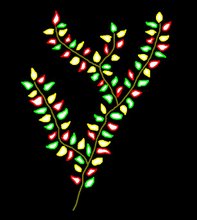